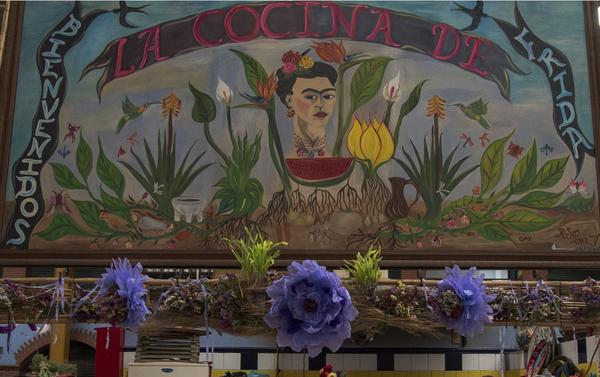 A potter and a chef discuss the late, iconic artist's influence

March 8 marks International Women's Day, a day which is observed annually to commemorate the progress made in the area of gender equality, and to reflect on the necessary changes and challenges required going forward. This year's International Women's Day theme is Balance for Better: when women and female-identifying people are empowered, we all benefit. All this week, the G Adventures blog will be looking at the ways travel impacts women — and vice versa. Today, we speak with two Mexican women who have been inspired and empowered by legendary artist Frida Kahlo.

A Mexican artist famous for her self-portraits, Frida Kahlo was one of the most empowering female figures of the 20th century. Married, divorced and remarried to muralist Diego Rivera, she led a tumultuous personal life which arguably gained greater notoriety than her actual work.

Disfigured in a tram accident, leaving her unable to conceive, and tortured by infidelity, she suffered a series of tragedies. Yet, her flamboyant dress sense and celebration of an indigenous ancestry made Frida Kahlo a hit with Mexicans – especially women.

Both a pop icon and a symbol of national pride, her image dominates souvenir stalls, appearing on T-shirts, notebooks and even shoes. Queues to enter La Casa Azul, her former home in Mexico City, snake for hours, and many tourists make the pilgrimage to folkloric, fairy-tale state Oaxaca to explore Kahlo's spiritual roots. Although Frida Kahlo never lived there, she touched the lives of many, including these two women inspired and enriched by her legacy.

Bent double in a chair, her head nodding gently, 71-year-old Josefina Aguilar is dozing in the stupefying mid-afternoon Mexican heat. She’s taking a well-earned break. A prolific potter, her handiwork crowds the shelves of a dusty workshop on the outskirts of Ocotlán de Morelos, an hour’s drive south of Oaxaca City.

Her colourful clay mu?ecas (dolls) feature a variety of creative designs, including a woman cradling a monkey and another wearing a crown of parrots and tropical flowers. But the pieces, which Josefina sells for 200 pesos each, are all inspired by one subject, a woman who captured the frail old lady’s imagination more than 30 years ago.

Although she never met Frida Kahlo, Josefina found affinity with the troubled artist. “I can’t read or write, so I listened to the stories people tell me,” she whispers in Spanish, with one eye half open. As a woman, she admired Frida’s courage, as a mother she empathized with her loss. “We were opposites; I had many children and she had none.”

In the past, Josefina could master a mu?eca in just 30 minutes, but poor eyesight means that, these days, it takes “mucho tiempo” and her husband is now responsible for painting the final touches. “I’ve made so many in my lifetime,” she chuckles, although she admits one piece does stand out — a slightly macabre two-headed doll, featuring Frida’s face and her own.

Dressed in an embroidered mandil apron, her silver hair swept back with chrysanthemums and her eyebrows connected by a thick slug of make-up, Beatriz Vásquez Gómez is the spitting image of Frida Kahlo. The uncanny likeness, which she first noticed in her early 20s, has spawned a successful business and completely transformed the 53-year-old’s life.

After inheriting her mother’s market stall in Ocotlán de Morelos, she renamed it La Cocina de Frida and began dressing up like the artist every day. “I even perfume my underwear with rose petals,” she playfully reveals, even though there’s no evidence to suggest Frida religiously did the same.

Today, tourists come from around the world to take selfies with spotlight-loving Beatriz, stopping to try her enchiladas and mole sauces. Her excellent cooking is equally deserving of attention, and she’s now learning to make some of Frida’s favourite recipes, such as ribs marinated in mezcal.

But it’s not just looks the two women have in common; Beatriz relates to her heroine’s troubled personal life too. “Like Frida, I have had many disappointments,” she sighs, staring at her ringless fingers. “She is an example; she gives me the strength to continue.”

Beatriz claims she even “met” the artist in a dream eight years ago: “She wrapped me in a white sheet and a dragonfly and told me to fly and not be afraid.”