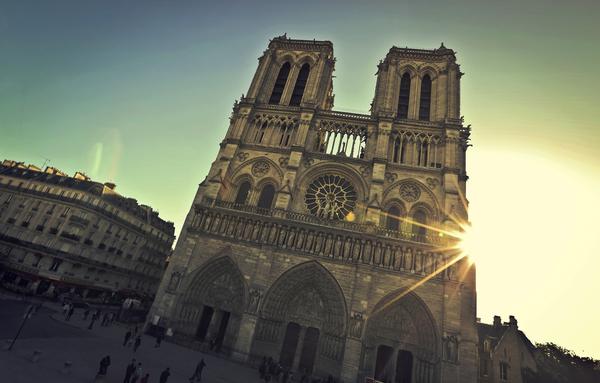 Why we mourn Notre Dame

The Cathedral fire represented, to all those watching, the loss of something beyond the physical building itself

On April 15, 2018, my mother, sister and I visited Notre Dame. We first stopped in a park nearby to eat sandwiches. It was our third day in Paris, and we’d adjusted to the difference in time, so we strolled more leisurely, like flaneurs. It was April and the season’s newness was beginning to unfold.

It’s difficult to describe seeing Notre Dame in person because it’s so familiar: the perched gargoyles and chimeras looming over the city as simultaneous protectors and villains; the Last Judgement on the west facade featuring Adam and Eve and all their friends; the stained glass rose windows, visible for all their grandeur from the outside. In one of my university classes, I remember learning about Point Zero in front of the cathedral: the supposed precise centre of the country, the centre of Paris. Seeing and feeling all of this in person is so surreal, I’m not sure I remember it correctly.

I watched my mother, a lapsed Catholic, wander around this imposing Catholic symbol, taking in its splendour. My sister and I followed by closely, unsure of how to move in a space so heavy with history. I remember my mother standing in front of a set of photos that explained Notre Dame's construction. My mother had never been this close to history before. I mean, a European history that profoundly shaped how we view culture and, for her, a religion she no longer felt she belonged to. She was struck by how people —?regular people! — could create a structure like this out of nothing. To her, the possibility of how intricate and divine the designs on the windows were so far out of her scope. It was true magic, she said. Magic like this doesn’t exist anymore. We live in a world where our relics are quickly disintegrating. We absorbed as much of Notre Dame as we could.

A year later to the day, I watched on my computer screen in Toronto as the great spire of Notre Dame collapsed through a gaping hole where the cathedral’s roof used to be, burning in a pit of fire.

The immense collective grief we’ve all felt watching Notre Dame burn is unsurprising, though some of the earliest reactions were those noting that, really, time comes for us all. Historical monuments have been lost to natural decay and fiscal irresponsibility. Historical edifices have also been readily lost to violent, purposeful destruction, too, more often than not by Western countries to non-Western ones. So I expected the nihilism. I expected someone to say that this church, what it represents — a symbol of annihilation to many — had simply reached its inevitable end. Or a partial end. The path to an end. The bell towers are intact but wooden structures and some art, centuries old, are lost forever.

But, overwhelmingly, people mourned. There were almost three million uses (and counting) of the hashtag #NotreDame on Twitter, many users sharing photos or memories of visiting it for the first time. Gatherers in Paris sang “Ave Maria” outside as the building burned. Architecture and art invoke something in us; an emotional reaction we hadn’t thought possible.

With Notre Dame at Kilometre Zero, it truly was central to Paris, more so than the circa-19th-century-built Eiffel Tower. It took nearly three centuries for the cathedral to be constructed the way we see it today. The original cathedral was torn down in 1160 with new foundation in 1163. The flying buttresses were added last in the 14th century. It stood while the city of Paris went from monarchical rule to a Republic. It survived two world wars.

When we collectively mourn a monument like Notre Dame, we aren’t mourning the literal, physical building. It’s something more esoteric: it’s the loss of history, sometimes shared, sometimes complex, sometimes difficult. We mourn the loss of a testament to human ingenuity and resilience, and a shared desire to experience the physical manifestations of that remarkable humanity in person. We mourn the idea that some things — the most beautiful things, the things that those of us who’ve been lucky enough to see them will remember as long as we live — are meant to last forever.

But, of course, there’s no such thing as forever. Recently, I lost all of the photos I took in Paris last year. Watching the cathedral in flames, a year later, felt like a knife twisting in my heart. For a chronicler of experiences, it feels as though I had lost my entire trip when I lost my pictures. Now I was losing part of the physical thing I spent time in.

On my last night in Paris, I took a boat tour of the Seine. No one really spoke. We listened in earnest as the tour guide pointed out monuments, and the people, themselves long gone, that they represented. When we got to Notre Dame, the sky had turned a lilac purple and the Eiffel Tower’s lights began to flicker. We curved around one side and the Cathedral’s spire revealed itself.

No photo can adequately capture the enormity of a building like Notre Dame, because its significance transcends the physical. And that’s why its destruction is so profound.

I remember my last look at Notre Dame. It was pristine, and it was whole.