Unexpected Cairo: Out of the Shadows of the Pyramids

You may come to Cairo for the antiquities and monuments, but don’t be surprised if what you fall in love with is this city’s modern-day charm.

The sun sinks slowly between two giant triangular stone structures; the long shadow of the Sphinx cast over the cooling desert sand; a camel is led by an elderly white-robed man who sells rides and photo opportunities to tourists through the day. The day closes on Cairo, a city that draws people the world over with images and stories from its glorious past.

However, while Cairo’s awe-inspiring feats of ancient engineering — its hand-carved monuments and museums packed with priceless antiquities commonly capture the imagination of most travellers — what should not be overlooked is that the modern-day metropolis has a distinct local culture for you to explore.

Eats from the street

Long before it became the eating style among “hipsterrific,” skinny-jean wearing, Instagramming beard cultivators, street food was big in Cairo. However, the local street food providers in Egypt’s capital generally don’t lower themselves to menus polluted with some paleo Hybrid-Vietnamese/Mexican culinary abominations, but rather focus on delivering unapologetically calorie-laden food at good prices, right on the street.

From moreish falafals, to freshly baked Arabic breads to delicious minced marinated lamb kofta kebabs, the streets of Cairo are a roll call of Middle Eastern culinary classic hits, along with local specialties like mahshi (peppers stuffed with spiced rice). Carnivorous travellers should seek out a street food stall selling a local form of halaweyat, which is basically a pot full of lamb parts boiling in their own grease, often served in Arabic bread.

Lazy conversation fills the air as the ghostly vapour from the tall metallic hookah pipe billows out, looking like the smokestack from an industrial factory. Out-of-hours’ office workers, taxi drivers, artists and university students crowd the street side on plastic chairs. The owner of the ahwa, or coffee house, moves on instinct at the sound of an empty glass being rattled on the table.

Ahwas are the great leveller in Cairo society, a cauldron of people from different backgrounds and different points of view. Filled with everything from creatives arguing for a more open society to practice their mode of expression, to older, conservative-minded locals who lament young people mixing in the same coffee shop as them, ahwas are where you go if you want to hear what the people on the street really think.

Although in recent years the government has closed some of the more openly political ahwas around the Borsa area, there are still many coffee shops and street-side cafes worth seeking out in Cairo, like those around the Omar Effendi in the Mohandessin district.

Searching for a different sound

Two wooden sticks dance lightly across the skin of the snare drum. The trumpeter’s cheeks balloon out looking like his face could burst at any moment. Fingers pluck at the double bass and the pianist is lost in a solo, forgetting there is anyone around. While such sights may be more expected in Chicago, Paris, Berlin or one of the world’s centres of jazz, Cairo’s lively local jazz community will surprise and delight travellers looking to hear something different.

On the banks of the Nile, the annual Cairo Jazz Festival brings together prominent local jazz musicians and international stars every October to promote not only the music genre, but also freedom of expression and innovation in the arts. For those music-minded people looking for a weekly jazz fix, the ever-popular Cairo Jazz Club delivers quality music, good drinks and regularly packs surprisingly large crowds into its intimate surrounds. Just be sure to book a table ahead of time to guarantee entry.

Modern art in a modern city

When you think about Egypt and art, giant phallic rock sculptures or two-dimensional papyrus paintings of humans sporting a varied range of animal heads from a time long, long ago may be foremost in mind. However, while the area around Cairo was undoubtedly a hub for artistic expression thousands of years ago, this doesn’t mean that new works of significance are not being created and displayed in the city today.

Egypt has spawned many intentionally renowned street artists over recent decades, including Ganzeer, or “bicycle chain,” who blurs the line between activism and art, combining modern graphic design principles with his own take on contemporary expression.

To witness some of the best local contemporary art, head to the Townhouse Gallery?in downtown Cairo. The gallery was the first independent art space in Egypt, and operates on a non-profit basis to bring contemporary art to the people of Cairo while supporting the creative endeavours of new and existing artists. Exhibitions are regularly rotated, and this gallery is a must-visit for those who like their art to not have sat around collecting dust for a millennium or two.

Down by the river

An aged wooden felucca glides across the broken brown surface of the River Nile; the muddy waters parting as the small boat cuts against the current. The sail of the traditional Egyptian river craft is taut in the late afternoon breeze. It’s a scene that has been played out on the river many thousands of times, over thousands of years, and today it’s best taken in from one of Cairo’s sophisticated bank-side bars.

Located on the northern tip of Gezira Island, Sequina restaurant and bar has a relaxed atmosphere and unparalleled views of the Nile and West Cairo, making it an ideal place for winding down with a drink and shisha after a hard day’s sightseeing.

Beloved of Egypt’s crisp, white-shirted cocktail set, the Lemon Tree & Co serves up some of Cairo’s best Nile-side cityscapes and early evening alcohol-infused inventions from the rooftop of an old imperial boat in Zamalek. Obscenely comfortable wooden chairs, and a modern, adventurous drinks list will ensure that any visit is a long one.

An oasis of green

I like cities with character with a little dirt under their fingernails. I want to step out of a city’s airport and have my nose assaulted by the smell of burning petrol and the obnoxious urban drone of car horns. But while Cairo is undoubtedly busy, and its roadways can be little overwhelming at times, there are tranquil pockets that locals escape to that need to be explored.

My favourite Cairo escape was actually born out of a mountain of garbage that had been collected over a number of centuries. Following an extensive restoration program, Al-Azhar Park was opened to the public in 2005 and has achieved significant global recognition including being listed as one of the world's 60 great public spaces by the Project for Public Space. The gardens are not only an unforgettable oasis of greenery to relax in, but are also an aural attraction in their own right, featuring fountains, multi-coloured stonework, raised, terraced and sunken gardens, intersecting waterways and distinctly Islamic elements of design.

G Adventures runs a number of departures in Egypt encompassing a wide range of departure dates and activities to cater to different tastes. We’re thrilled at the prospect of showing you this big blue planet of ours — check out our small group trips here. 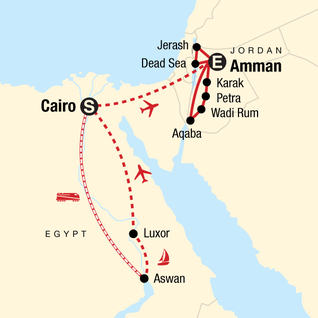 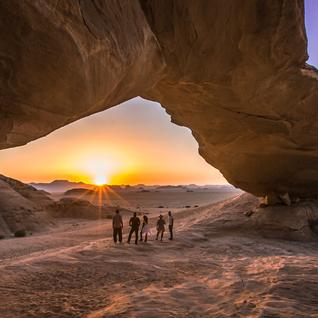 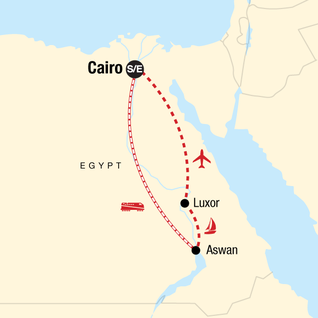 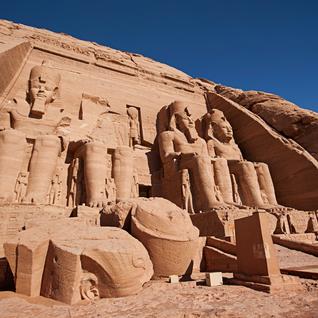 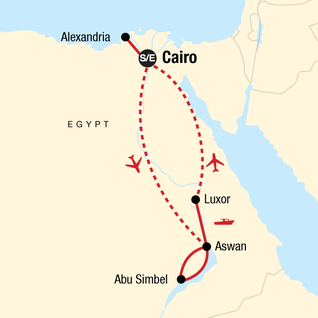 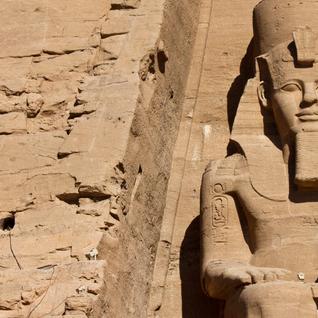