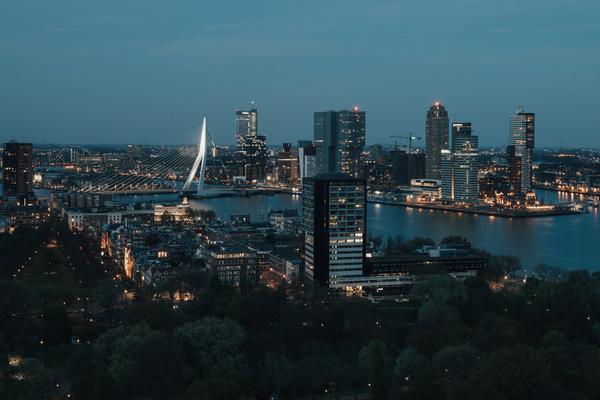 Why Rotterdam is the best city in the Netherlands

... with apologies to Amsterdam

Don’t believe anyone who tells you there are two kinds of cities. There are a thousand kinds of cities. Istanbul, New York, Mexico City, Buenos Aires, Toronto, and Belgrade are all brilliant cities — the best I’ve seen in the world. But they are all utterly different. So different, you can’t even compare them, at least not responsibly.

But in the Netherlands, there are two kinds of cities. One is Amsterdam; the other is Rotterdam.

Amsterdam is — well, you already know all about Amsterdam. It’s one of the most visited cities in the world. Its canals, its now decreasingly unique pot cafes, its red light district. It’s beautiful, it’s distinct, and it’s very, very popular.

I’m going to guess you don’t know Rotterdam, though, which is a shame. Because Rotterdam is the best Dutch city.

Amsterdam has been a port, a trading hub, the centre of an empire, and a tourist attraction for hundreds of years. It is, like an underwear model, very aware of how every little part of it looks. And I understand why you might like that kind of thing. I mean, just look at it. But over time, it becomes clear all the prettiness is there for you. It’s not pandering so much as a kind of reflection of your preconceptions, tastes, desires.

Rotterdam is what happens if that guy ate a burger every once in a while. The six pack might mush out a bit, but he’d be way happier.

Rotterdam is, like things put together for themselves instead of others, a lot of things at once, and the Netherlands’ other cities are more like it than they are like Amsterdam, which is its own sui generis creation. It’s multicultural: In a county that’s had a lot of problems moving into the age of immigration, and who especially have not liked Muslims, Rotterdam has had a Muslim mayor, Ahmed Aboutalkeb, since 2009. It’s an architectural showcase: Having been completely destroyed in the war, the city decided to rebuild itself decade by decade, inviting architects to stretch and be modern. It also boldly filled in most of its canals, the very things that make Amsterdam so charming to tourists. But they thought roads made more sense, and they were right.

The result is like a city-sized museum of architecture, with some of the best examples of each era from the 1950s onwards on display. (There’s even an award-winning McDonald’s.)

But maybe the best thing about the city is that it’s thoroughly Dutch, but even more than that, it’s the best of Dutch (see: the mayor). The ethnic diversity is as visible on the streets as it is in the shops. The former Dutch empire is well represented, but on a continent increasingly known for its antagonism towards immigrants who look a certain way (that is, not white), Rotterdam seems to have become a European magnet.

One thing you’ll find in Rotterdam that you won’t find elsewhere without taking a much longer flight are Surinamese restaurants. They’re everywhere, with food perfectly suited to quick-serve urban demand.

Like the Markthal, the huge new market building, which was opened in 2014 by Queen Máxima – the Netherlands has a queen named Máxima, by the way. Its rounded, elongated glass mass can only be described as Markthal-shaped. Inside, there’s a massive hyper-realist fresco of fruit and vegetables blasted across the arching ceiling, under which are well arranged kiosks selling produce for the locals, those Dutch pancake cookies for the tourists, and a whole bunch of stuff for everyone. There are also a few restaurants, both on ground level and slightly elevated in the huge open space to give drinkers and diners a few of the life this building has collected under its canopy. I’ve been three times now, and every time, it’s bustled.

Just across the square, you can take a tour of one of Amsterdam-born architect Piet Blom’s cube houses, which went up in 1980. Designed to look like a built forest, these green cubes on pedestals are one of the city’s standout pieces of built art. Most are still private homes, but one was reserved to let everyone else see what they’re like, and they’re remarkable. Sight lines that go horizontally, vertically, and diagonally, with rooms in shapes that should be awkward but aren’t, these houses are a testament to what can be done when a first-rate architect puts their mind to genuinely rethinking residential architecture.

There are at least a dozen more examples of absolutely remarkable buildings, and scores more of first-rate stuff that makes this a joy to walk through. And that would be plenty to warrant a trip.

But Rotterdam is also the birthplace of gin.

Specifically, Schiedam, which was once a standalone town but is now a stop on the Rotterdam subway (a line — to show you how small this country is — that also includes Den Haag). You can go to Schiedam and visit old distilleries, see where Ketel got its start (known now for its vodka, it started as one of the world’s first gin distilleries). But you don’t have to. Rotterdam itself is a hive of gin activity, and there’s a whole gin and tonic thing happening here which, though it’s also happening in Barcelona, and is always happening in London, is just better here because this is where gin comes from. Go down to Witte de With, the club, bar, restaurant, hipster part of town — you can’t miss it, there’s outdoor art lit up with the name of the place all over it — and get a seat if you can at The Ballroom, where they boast 50 different kinds of the mixed drink, made with house-made tonics, local gins big and small, and garnishes running from grapefruit to rosemary spears to tight-wound flutes of jamón. You’ll never be able to drink the Schweppes version again.

And once you’ve been to Rotterdam, you’ll probably think twice about how you rank the Netherlands’ two types of city.

Ready to see Rotterdam for yourself? G Adventures can get you there(ish —?we go as far as Amsterdam, but Rotterdam is just an hour away)! Check out our small group tours to the Netherlands here.