Latvia’s compact capital is a wondrous, stacked cake full of surprises. If it actually were a cake, it would be the kind with good-luck charms and chocolate baubles embedded in the mix, plus bits of edible gold.

Lift your fork and burrow down into Riga’s many cultural layers. The crusty (but sweet and very deep) base is Riga’s ancient pagan Nordic culture: a romantic world of gods and magic that is still very present and resonant, and whose symbols appear in everything from textiles to candies. The centre layer is Latvia and Riga’s dark history of wars, occupations, and terrible tragedies, a history also always present and movingly commemorated. But don’t fear Riga’s history: The city owns its troubled past with honesty and vigilance, and a never-again resolve that has no time for morbidity. And what’s a good cake without a pinch of salt?

The icing is Riga today. A lively, seductive city, Riga welcomes you with boisterous confidence and a self-assured but never pushy strut. The largest of the Baltic capitals, Riga’s unique brand of reserved but attentive hospitality has not yet been strained by the increasing hordes of tourists. Go while the going is good.

(And rather than beat my cake metaphor to crumbs, I’ll direct you instead to tasty Miit Cafe, the epicentre of Riga’s burgeoning hipster/vegetarian/coffee-house scene, where you should definitely try the addictive fried brownies.)

The first thing every guide book to Riga mentions is the city’s Art Nouveau architecture. Somehow, all the city’s mountains of gilt and madcap masonry escaped the cold, Brutalist stare of the Soviet occupation, and today Riga’s “Art Nouveau Zone” is a protected UNESCO Heritage site. You’ll notice Art Nouveau flourishes throughout Riga, but the lovingly polished and tidied corner where Elizabetes Street meets Brivibas Boulevard offers the most eye-popping wonders.

Here’s what I saw on one (one!) granite facade alone: a massive (and model-handsome), multi-storey-high crowned god's head, decorated with Egyptian and Zoroastrian symbols, resting beside a peacock-eagle-griffin hybrid creature, in front of a back fan of eyeball-dappled feathers, with the entire ensemble watched over by a screaming, bearded demon head sporting an Eye of Horus headdress. Phew.

Even the plinths supporting this hallucination in stone were covered in garlands, arabesque cornices, slinky snakes, and buckets of sun-catching gilt.

If you are travelling with a minimalism-loving pal, one of those severe types who likes clean lines and detests fussy decor, send them to the Galleria Riga, one of the city’s many achingly modern, brand new malls. At the Galleria, your ornament-phobic friend can visit the top floor and have a snack while watching the clouds reflected on the city’s minimalist luxury hotels.

Or, both of you stick close to the ground and visit the nutty Central Market, a sprawling complex of shops, pavilions and banged-together stalls hugging the Riga branch of the mighty Daugava river. With its pristine main halls (built from the remains of First World War German Zeppelin hangars) sitting pretty beside dozens of plywood micro-bars and fried fish shacks, the rough and ready Central Market is as “real Riga” as it gets.

Aged market regulars sell bunches of violets plucked from the river banks while techies offer discounted smart phones. Clothes dealers shill the latest Russian heavy metal band t-shirts as cunning old ladies hawk lard and sugar pies. I was quite taken with the thick, pagan symbol-decked hand-knit sweaters and the dried fish heads arranged like flower bouquets. Take your time. Everybody else is.

The Riga tourism office makes helpful maps of the city, as do all tourism offices. But one odd thing caught my attention on the map I was given: an area officially designated (or at least endorsed as such) as Riga’s “Hipster Zone." Smirk if you must, but every city has a hipster zone now, so why not be upfront about it? Cool is just as much a commodity as history. Riga’s hipster zone is located in the city's north east, relatively far away from the Old Town and the Art Nouveau zone, but still easily accessed by streetcar. Most of the shops, “ruin bars” and vintage clothing stores are found on Peace Street — which is so named because Riga’s main graveyard is close by.

For people from larger cities, Peace Street might seem like just a good first try at hipsterism, but it is so much more. The hipster-y businesses are more service-oriented and casual than they are anxious about their status (unlike, say, Berlin’s Neukoln or Toronto’s Dundas West), and not everybody has a beard. Suited business people and retirees share coffee shops with tattooed barbers. Nobody tries too hard.

I wonder if something was lost in translation at the Riga tourism office: the “Hipster zone” ought to be called the “young people saving old buildings zone,” because this part of town has one of the city’s nicest collections of traditional Latvian wooden houses — a collection that, unlike more overtly “preserved” (and now posh) areas of Riga, features buildings that are still lived in by working class people (i.e. the population the buildings were actually made for). So far, the balance between new money hipster kids and no money long time residents remains even, and thriving.

Hipsters aside, the area is also home to the legendary Laima chocolate factory. Laima chocolates, named after the pagan Baltic goddess of luck and fortune, are to Latvians what Hershey bars are to Americans: mouth-watering national treasures.

At the factory there is a small but well-curated Chocolate Museum (the Soviet era candy wrappers are weirdly playful), and you can buy generous bulk bags as well as daintily wrapped boxes of Laima products fresh off the conveyor belt.

Even the cool kids drop in for their daily fix. Chocolate, like Latvia itself, cares little for social boundaries.

Want to see Riga for yourself? G Adventures can get you there. Check out our Baltic Adventure tour here. 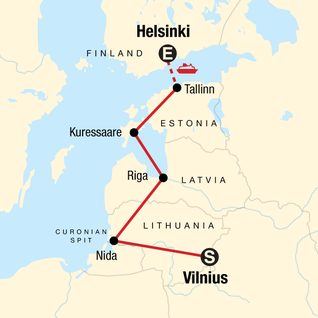 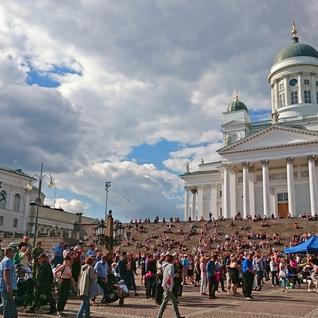