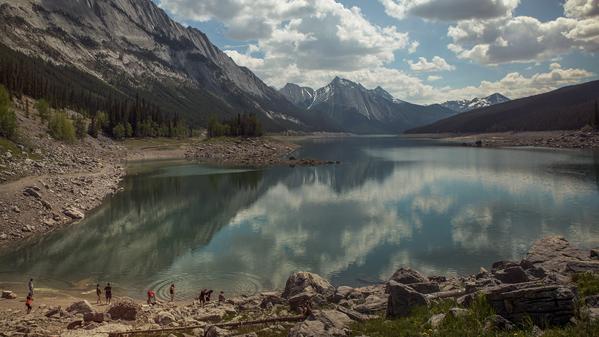 Pics of the Week: Alberta & BC

With some of the most breathtaking scenery in the world it's no surprise that Alberta and BC make our Pics of the Week.

This week, we're shining a light on Western Canada with our "Pics of the Week". Alberta and BC are vast —filled with inspiring scenery, wildlife, a multitude of recreational activities for all ages and a lot of unique opportunities that only the people who live in this area know about. Whether you're blazing the summer trails in Alberta's Banff National Park or visiting BC's Whistler for world-class skiing in the winter, this is a part of the world that will leave an indelible mark in your mind.

Shooting through narrow canyons, dodging the rocks and swerving around the next bend in the river—few experiences get the adrenaline pumping like whitewater rafting in Alberta and BC!

At 300 sq km, Alberta's Columbia Icefield is the largest glacier in North America outside Alaska—so big that it creates its own weather systems!

A grizzly nuzzles her cub. Grizzly sows look after their young for 4–5 years, teaching them to forage and hunt, and protecting them from predators. British Columbia has the largest population of grizzly bears of any province in Canada.

Join G Adventures for a paddle on Alberta's Moraine Lake, a glacially-fed lake in Banff National Park. Look familiar? The lake's kinda a big deal. It was featured on the reverse side of the 1969 and 1979 issues of the Canadian twenty dollar bill.

A 'pod' of orcas plies the waters off the coast of British Columbia. Orcas are highly social animals that spend their entire lives in close-knit family groups. They are co-operative hunters whose behaviour some liken to wolves.

With some of the most breathtaking scenery in the world, Alberta and BC host some of North America’s top ski and snowboard resorts — not to mention picturesque villages and historic trails for shopping and hiking. Has this post piqued your curiosity? Join a small group and explore Alberta and BC with G Adventures.