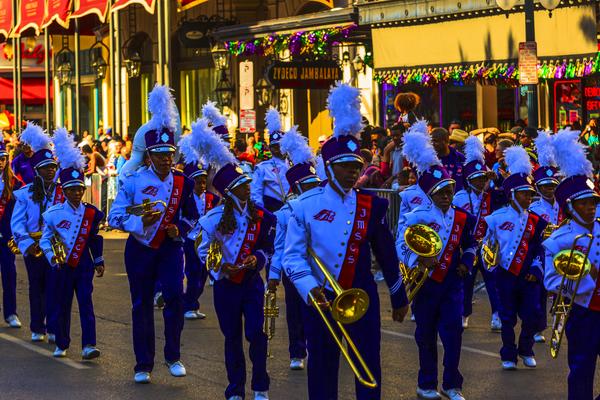 Mardi Gras: By the numbers

Here's what goes into New Orleans' biggest party of the year

by Rebecca Tucker Posted on 19 December 2017

When you think of New Orleans, plenty of things might immediately come to mind: amazing food, live music, and Mardi Gras. The annual celebration, which takes place for around two weeks ahead of Shrove Tuesday (the day before the beginning of Catholic Lent), is a bevvy of parades, parties, and performances that culminates in one final, giant parade on Shrove Tuesday — a.k.a. Fat Tuesday, or Mardi Gras in French. It's a lot of fun —?and a lot goes into it. Here's a quick look at New Orleans' annual Mardi Gras celebrations, by the numbers:

0: Number of people riding on floats during Mardi Gras parades who can be unmasked; float-riding without a mask on is actually against the law

$5.72: The average price of a Mardi Gras mask, in USD, according to kesq.com

10.4 million: Number of visitors to New Orleans during Mardi Gras in 2016 — the first time the city was able to reach its pre-Katrina tourism numbers.

2,000: Approximate number of Mardi Gras parades that have taken place in New Orleans since 1857

$164 billion: Total amount, in U.S. dollars, of the direct impact that Mardi Gras has on the New Orleans economy

90-95%: Percentage of hotel rooms in New Orleans that are booked a month ahead of Mardi Gras

Ready to celebrate Mardi Gras in New Orleans? G Adventures can get you there. Check out our Iconic Mardi Gras trip here.