Ferroequinology: Inside the secret world of railfans

All aboard! Next stop: railfandom. Join G Adventures’ very own Steve English and explore the world of rail enthusiasts and trainspotters—those among us with a strong affinity for anything related to trains and rail travel!

If you travel at all, you’ve more than likely taken a train to get from one destination to another. For most of us, the train is little more than a means to an end; a utilitarian tool that connects faraway places. For others, though, trains are magical; powerful machines that crisscross vast, beautiful, and lonely landscapes, linking sprawling cities and remote outposts with seemingly never-ending highways of steel. There’s a word for people who see trains through this romantic lens: railfans.

A railfan, also known as a “rail enthusiast” or “train buff” in North America, is a person with a strong affinity for anything related to trains and rail travel. (Some particularly dedicated railfans prefer the term ferroequinologist, “one who studies iron horses.”) Virtually every country that has a rail network has its own dedicated railfan community. What draws railfans to the hobby differs by the individual, but most are simply fascinated by big, powerful machines built to tame vast, untamable lands. Railfandom is a pretty big and inclusive tent, encompassing hobbyists of all stripes and all over the world, from photographers to engineering geeks to collectors to scale-modellers.

With almost 200 years of history to delve into and mile upon endless mile of track to explore, it’s not surprising that so many people are drawn to trains. To a true-blue railfan, virtually everything and anything associated with rail transport, from timetables to infrastructure to the makes and models of engines can become objects of intense, even obsessive interest.

Some limit themselves to capturing and sharing images of favourite or rare trains as a means of preserving history or simply for the challenge of lining up the perfect “meet” – a photo that captures the fleeting instant in which two trains moving in opposite directions are face-to-face.

Then there are the trainspotters, a unique and chiefly British subset of railfandom who often take up watch on bridges or platforms to religiously chronicle the comings and goings of trains. Like that of a birdwatcher, the life of a trainspotter is an often solitary and contemplative existence spent waiting for the rare thrill of a new variety of rolling stock to add to the logbook. Some trainspotters are so intimately familiar with the local rail systems that they’re often sought out by track officials to serve as unofficial security teams, alerting the proper authorities to vandalism, suspicious behaviour, and irregularities.

More outgoing railfans often engage in a practice called “complete riding,” in which they attempt to personally ride every kilometer of rail in a city, state, or even country. (Some even hold informal competitions to see who can cover the most track in the least time, or compete to see who can get to the most remote station or rail shed, a process nicknamed “bashing.”) But it’s not all pointless nerdery; some of the world’s best biking and hiking trails lie along abandoned railway lines discovered (or re-discovered) by outdoorsy railfans.

Still others devote their time to tracking down and collecting rare or unusual pieces of railroad ephemera – railroadiana as its known in the trade – that includes just about anything from vintage timetables and tickets from exotic or defunct rail lines to bells, lanterns, and even complete tea services from beloved trains.

G Adventures?runs a number of rail journeys encompassing a wide range of departure dates and activities to cater for different tastes. We’re thrilled at the prospect of showing you this big blue planet of ours— check out our rail tours?here. 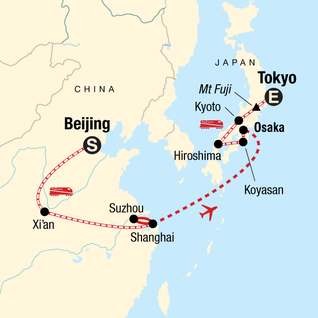