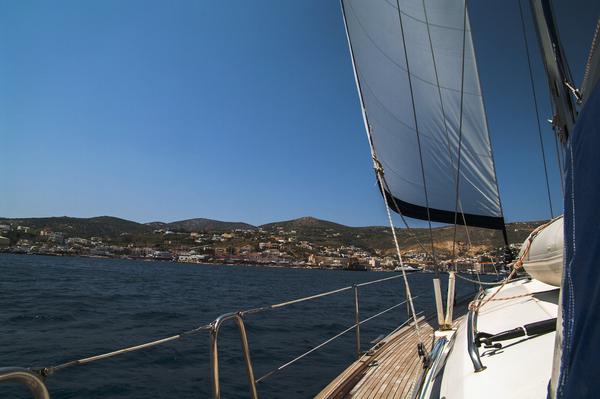 Forget perfect: Adventure is unfiltered. In a new blog series, G Adventures is asking a few people to share memories from trips where things went a bit sideways, but it made for the best story —?and the most unforgettable experience. Today, Aussie TV presenter Lauren Phillips on how to make the most of a 14-hour boat ride. Have your own Unfiltered story? Click here to find out how you can win a trip for two with G Adventures by sharing it.

Ah, the joys of travelling. I love the excitement of a spontaneous trip, so there’s something inside me that must love the thrill of that “oh-my-god-hurry-or-we-are-going-to-miss-this-flight” feeling. I’ve managed to miss more flights than I’ve had hot dinners — but I’ve also somehow managed to talk my way onto flights, ships, trains, and buses way past their final boarding calls, which is usually celebrated with a huge sigh of relief and an icy cold drink when I’ve finally reached my destination.

Living life on the road and being a keen traveller, you always have to be ready for things to go not exactly to plan. You need to be adaptable and keep your cool. That’s the thrill of the adventure, right?

When I was 20 years old, two girlfriends and I had saved up to spend a summer together in Europe. There weren’t going to be any five-star hotels, but we weren’t exactly backpacking, either. I mean, I took a backpack, but any real backpacker knew that Elise, Georgie, and I — with our clean hair, designer backpacks, and straw fedoras — weren’t really roughing it.

We’d successfully travelled to Germany, England, Switzerland, and France without getting into too much trouble, and we were off to finish our girls’ trip in Greece. We were at Athens airport, had collected our bags, and were ready to get to the islands.

Then we realized that … we didn’t quite know how to get there. We hadn’t booked a boat, a car, or a bus. But really, how hard could it be to get to Mikonos from Athens? Was it like going to Philip Island? A drive-over-a-long-bridge kind of island? Nope: we needed a ferry. But was it a Sydney Harbour, takes-20-minutes kind of ferry? We had no idea what we were doing. Obviously.

After an iced latte and a quick dash around Athens airport, we were told that if we ran to the bus stop we might just make the last bus heading down to the port, and then we might make it onto one of the late boats. With the fear of sleeping overnight on the floor at the Athens Airport, we bolted. You’ve never seen three fake backpackers try to run faster. We made it, but the bus to the ferry was fully booked. Of course it was. So we begged. We’d be happy to stand in the aisle, we said.

The bus driver finally let us on after the quick-thinking Elise told him how missing the bus meant missing the ferry, which meant missing our mum’s surprise 50th birthday party in Mikonos that night (not true?— but worth it).

Once we had arrived at the port, we thought we were on the way. But that’s where we realized we really had no idea what was going on. All I remember is a lady telling us “the boat has already closed boarding and stopped accepting luggage half an hour ago but if you run” (AGAIN?) “and you’re happy to take your luggage”(I think she meant backpacks) “on board — if you beg — they might let you on.” Mission accomplished. We boarded the boat with the same sad eyes — and the same desperate story about our mum’s (fake) birthday.

The boat departed at 6 p.m. and was due to arrive at 8 o’clock. There were no seats left but that was no problem. It was summer in Greece, and we wanted to be out on the deck in the sunshine anyway. We used our suitcases as our pillows, got our bikinis on, and sun-baked. Glam.

A few hours passed, the sun had started to set and in the middle of the Aegean Sea, it started to get a little windy and a little chilly. We’d be there soon, no problem.

It wasn’t until we were three and a half hours into our two-hour ferry that we decided perhaps we should work out where we were actually headed. We were on the right ferry. Check. We were heading to Mikonos. Great. We did depart at 6 p.m., and we were scheduled to arrive at 8 o’clock — but it was 9:30? With a roar of laughter, the men attending to the cats and dogs (and one wild turkey-like thing) on board told us that we were in fact arriving at 8 in the morning, not 8 at night. So there we were, three and a half hours into our 14-hour journey, outside, with no seats, freezing our wazoos off.

The lovely animal-loving men gave us a six-pack of beer, three mini ice creams, and a blanket (which smelled like it had kept 10 donkeys warm on its previous trip) and we settled in for the night. Fourteen hours later we made it to Mikonos with sore bellies from laughing and tucked into that post-holiday drama bevvy.

We have laughed about this trip since the day it happened. Lesson learned? It gets cold in the middle of the Aegean Sea, and your mum was right: always pack a sweater.

How do you do #AdventureUnfiltered? Whether it's not being able to find a bathroom in India or sampling crickets at a night market in Beijing, we want to see photos of your weirdest, wildest, most wonderful adventures —?and if you share, you could win a trip for two to the destination of your choice. Click here to share your #AdventureUnfiltered moment to win.