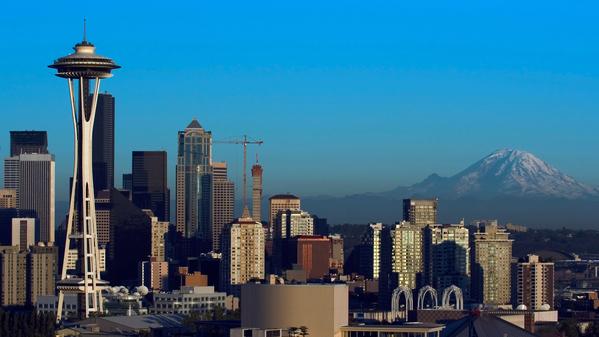 I’m standing at the foot of Jimi Hendrix’s grave...well if you can call it just a grave. Its more like a mausoleum, a national monument in Renton, Washington just minutes from downtown Seattle. I’m trying to find one inch of stone that isn’t covered in lipstick but I can’t. There are red lips, pinks lips, even fuchsia lips and lets be honest – when was it last time acceptable to wear fuchsia coloured lipstick? Thirty minutes ago I didn’t even know this was here, a potential point of interest to those visiting Seattle but here I am, standing near the entrance of the Greenwood Memorial Park mesmerized by gloss – admiring the final resting spot of a musical legend.

TOUR: Walk the equivalent of 3 city blocks – underground on Bill Speidel’s Underground Tour $16 per adult ticket departs daily on the hour. Below the streets of modern day Seattle are the subterranean lanes of old Seattle.

EAT: New Orleans Creole Restaurant- Live Blues and Jazz bands every night of the week. Mains from under $15 USD.

DRINK: The Central Salon- this 100 year plus bar has seen Seattle’s best in “grunge” play on its stage. Open 365 days a year.

EAT: A piroshky – a stuffed pie with a variety fillings such as Bavarian sausage, Sauerkraut carrot cabbage and onion or fresh rhubarb from Piroshky Russian Bakery.

LOCAL: Just below Pike Place Market in post alley - The Market Theater Gum Wall was started by one bored patron followed by another disposing of their gum on the bricks as they waited their turn to enter.

VISIT: EMP Museum The Jimi Hendrix: An Evolution of Sound, Guitar Gallery and The Roots & Branches Sculpture made of over 700 instruments has computer controlled self playing guitars with complimentary head phones.

VISIT: The Jimi Hendrix Memorial Project at the Greenwood Memorial Park in Renton Washington. In the words of Mr. Al Hendrix “A resting-place for a loved one is almost always a private issue dealt with quietly by family members. However, I have always understood that Jimi in some way belongs to his fans and the world”